The Mormon War On Gay People

I have never done anything - nor would I do anything - to impede or restrict the civil rights of Mormons. I respect their right to freedom of conscience and religion. In fact, it is one of my strongest convictions. But when they use
their money and power to target my family, to break it up, to demean it and
marginalize it, to strip me and my husband of our civil rights, then they have
started a war. And I am not a pacifist....
T]he Mormons are particularly vicious homophobes. Gay people are rendered invisible, their personhood erased in this church. The cruelty the Mormon church inflicts on its gay members is matched only by the Mormons' centuries-long demonization and hatred of black people. That African-Americans would seek common cause with a church that only recently still believed they were the product of Satan shows how profound homophobia can be. But this shared hatred can be exploited by the Hewitts and Romneys of this world. And what we have just witnessed is a trial run for much larger ambitions.
If we don't resist this now, we will not be able to resist it later. 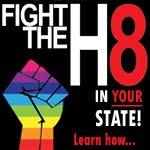